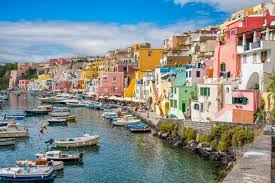 The small Neapolitan island of Procida was the surprise winner of the contest for Italy's Capital of Culture 2022, beating 10 other highly qualified finalists out of a total 28 competitors. The prestigious prize comes with a government grant of a million euros towards financing the package of proposed improvements and upgrades submitted by the candidates.

Procida is the first small community to win the title and the perks that come with it. The project, entitled “La Cultura Non Isola” (Culture doesn't isolate) a clever pun on the Italian word “isola” which can mean either “island” or “isolate”, involved 240 artists and 44 cultural projects to create a year-long programme of events. Procida's proposal centred round encouraging a type of sustainable “Slow Tourism” aimed at attracting visitors in all the four seasons of the year by offering more than a simple beach holiday.

Italy's Minister of Culture, Dario Franceschini, commented that the choice of Cultural Capital does not depend on the importance of the chosen location or its existing cultural heritage but on the originality and far-sightedness of the project presented. The Procida proposal, he said, could provide a model for other lesser-known areas, as well as a signal of optimism for the return of tourism in 2022.

Although the island with its rainbow houses is well-known to cinema (Films like “Il Postino”, “the Talented Mr. Ripley” and “Arturo's Island” were all shot here), it has always been overshadowed by its celebrated neighbours Capri and Ischia and until 1980 it was best known as the prison island for mafia bosses and high profile criminals.

The new proposals include upgrading the old D'Avalos fortress, which originally contained the prison, as a tourist attraction.