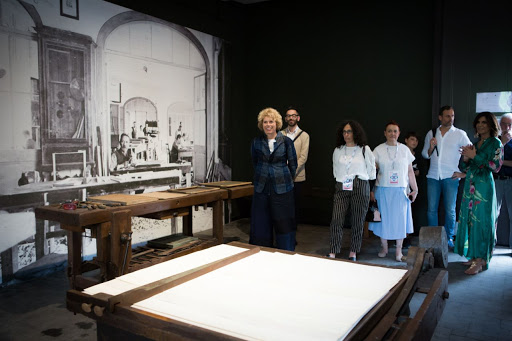 Recent research has identified the paper used by many of the great renaissance artists, such as Raphael and Michelangelo. Studies of the watermarks have revealed that the supplier was the celebrated paper manufacturer of Fabriano (Marche), operating since the Middle Ages and still producing paper products today.

The results of a pioneering study carried out by the Fedrigoni Fabriano Foundation to mark the 500th anniversary of the death of Raphael identified typical watermarks on the paper used by the artists during their terms of service at the papal court, such as an eagle, an anchor and an anchor crested by a star, among others.

The Historic Paper Warehouse, set up by the Fedrigoni Fabriano Foundation, contains a vast collection of historic tools as well as 15 moulds used in the manufacturing of handmade paper stamped with the image of Raphael and some of his most celebrated works.

The Foundation was set up in 2011 by the Fedrigoni company in order to promote the study of the history of paper and watermarks and to preserve medieval papermaking techniques. It encompasses the Archive of the Miliani Fabriano Paperworks, founded in 1782, which contains a collection of 1,500 watermarks, 1,200 historic photographs and a library of 3,000 volumes dedicated to the history of paper, as well as 2,213 ancient papers dating from 1276 to 1798, gathered by watermark scholar Augusto Zonghi.