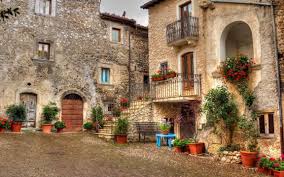 Italy has over 6,000 borghi (small historic villages), most with less than 5000 inhabitants. For decades these have been subjected to an inexorable population decline, leaving empty dwellings, shops and workshops, and with churches, monuments, little piazzas and former noble houses sinking into a state of progressive neglect.

Until recently, it seemed that their fate as sealed and that many of them were doomed to total abandonment, despite the valiant efforts of local administrations and cultural associations to revive them with various initiatives.

However, things now seem to be changing, thanks to the current pandemic and the consequent boom in online working, which is opening up new possibilities for Italy's villages. A programme of incentives launched by the Directorate-General for Contemporary Creativity, a special department of the Ministry of Cultural Heritage and Activities and Tourism, aimed at revitalizing the borghi, seems to be producing positive effects.

The Borghi in Festival programme offering to finance projects of urban regeneration has attracted over 643 proposals from all over the country.

Many old borghi are offering housing at symbolic prices and financial aid to families willing to come and settle with them. Recently launched incentives to transfer to Appeninne villages attracted 2,310 requests in a few days. The village of Graglio in the Val Veddasca (Lombardy) has chalked up a first success, with the first baby born in twenty-eight years, thanks to a family who transferred from Genoa, and a crowd funded initiative to attract new residents, launched by the 500 inhabitants of the Calabrian village of Vaccarizzo di Montalto Uffugo, once celebrated for silk production, has been incorporated in the Massachusetts Institute of Technology, Boston, Societal Transformation Lab, a worldwide experimental programme studying population re-distribution.