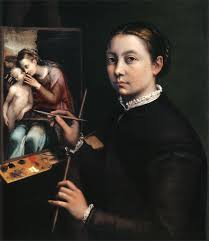 Milan's Royal Palace Museum is hosting a revolutionary exhibition of the works of many of the Italian women artists who made their mark during the 16th and 17th centuries. Most of these women were famous and much respected in their day, but have inexplicably been forgotten, with only one – Artemisia Gentileschi – who stands out as a household name today.

The exhibition “Le Signore dell'Arte” sets out to redress this wrong by presenting over 150 works by 34 women artists of the Renaissance. They include women who were members of the exclusive Academia di San Luca, where only the most talented artists were admitted, as well as some who were court painters and who ran their own studios and consorted with the most eminent figures of their day. They include Sofonisba Anguissola, whose talent was recognized by Michelangelo and who was employed for over ten years at the court of Philip II of Spain, Giovanna Garzoni, employed by the Medicis and who is credited with introducing or promoting the still life form, Lavinia Fontana, who, despite having eleven children, outclassed her painter husband and made him her agent, Elisabetta Sirani, who ran a highly successful art school for men and women and was buried in the same tomb as Guido Reni, as well as Artemisia Gentileschi, and many others.

The exhibition is programmed to run until the 6th June 2021.