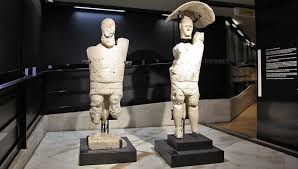 With pandemic figures reduced, Sardinia has reopened many archaeological sites and museums, including the Civic Museum G. Marangiu on the Sinis peninsula in west Sardinia (near Oristano), containing its celebrated and disquieting “Giants of Cabras”. Experts calculate that the group of unique 2 metre-tall stone warriors, dates back to around the 8th century BC and it is considered to be one of the most important archaeological finds of the Iron Age in Italy.

The statues were discovered by chance in 1974 in an ancient necropolis on Mont'e Prama, near the site of the Nuragic settlement of Tharros. In all, an estimated 45 sculptures, broken into some 5000 fragments, were recovered. Archaeologists have so far been able to identify some 28 figures, which include 16 boxers with shields and protected right hands, 6 archers with bows and breastplates and 6 warriors with helmets crowned with horns.

The “Giants” are only beginning to be known to a wider public now and are beginning to attract visitors to this hitherto remote area. After a lively debate with the local town council of the small town of Cabras, the Italian Ministry of Culture and Heritage has agreed to allow the other fragments to be restored in situ, instead of transferring them to the specialized laboratories in Cagliari. In addition, the Ministry has promised the town a grant of 3 million euro to build a new museum to house the “Giants”, and the important cache of artefacts found in the area.