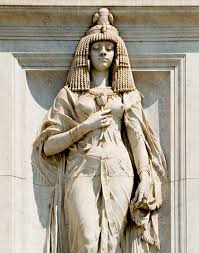 By a coincidence, two major exhibitions on at present in Rome highlight two of the most important figures who dominated the scene of late republican Rome at the end of the first century BC. The Scuderie del Quirinale are hosting Augustus, the first Roman emperor, while the Chiostro del Bramante reveals Cleopatra, Rome and the Enchantment of Egypt, the Egyptian queen who committed suicide in 30 BC to avoid the humiliation of being paraded through Rome in Octavian Augustus' Triumph after she and her lover Mark Anthony were defeated by the Roman army.

Augustus follows the course of Octavian's career and documents his long and prosperous reign over the vast Roman empire with over 200 rare archaeological objects from the Vatican, the British Museum, the Metropolitan of New York, the Paris Muse du Louvre and others  and contains a splendid range of sculptures, bronzes, terracotta, coins, gemstones, jewels, silverware and a famous cameo portrait. The exhibition has been organized in collaboration with the Louvre and will go on to be shown in the Grand Palais of Paris from the 19 March to the 13 July 2014.

Cleopatrat describes the life of the fascinating and enigmatic Egyptian Queen, who almost mastered Rome through her relationships with, first, Julius Caesar, with whom she had a son, and then Mark Anthony (twins were born of this union). The Vatican museum has lent an exquisite marble head, thought to be a portrait of this woman, famed for her beauty. The exhibition recounts the influence of Egypt on Roman religion, fashion and customs during the years the Queen spent in Rome at Julius Caesar's side, with paintings, mosaics, sculptures and jewellery of Egyptian inspiration. Cleopatra was not just a pretty face. She was a highly intelligent and cultured woman who spoke nine languages, including demotic, the language of the Egyptian people. This gave her the advantage of being able to communicate with her armies without the assistance of an interpreter.

Cleopatra,Rome and the Enchantment of Egypt until 2nd February 2014 www.mostracleopatra.it