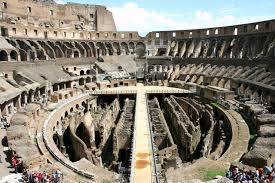 A proposal to recreate the arena of the Colosseum is stirring up a hot debate among Italy's archaeologists and conservationists. The idea was put forward by Roma3 university professor Daniele Manacorda and has been welcomed by Italy's Culture and Heritage Minister Dario Franceschini, as well as archaeologist Andrea Carandini, President of the Fondo Ambiente Italiano FAI (Italian Conservation Foundation).

The arena was intact until the end of the 19th century, as demonstrated in photographs in the Brothers Alinari archives and was only opened up to permit excavations of the subterranean passageways that were traversed by the gladiators and wild beasts destined to entertain the spectators of ancient Rome.

Among the positive aspects cited would be better access and use of the underground area for tourist visits. Caradini even goes as far as to suggest that the arena could be used for shows  - something which has been permitted on very rare occasions in the past, with a temporary stage specially constructed for the event.

Many archaeologists, however, are totally against the whole idea. They believe that the monument should be left undisturbed and should not be subjected to possible future commercialization.

Since nothing happens quickly in Rome, the debate is likely to go on for a very long time!