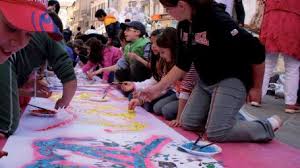 Between the 16th-19th April 2015, the streets of Perugia (Umbria) will be filled with the magical atmosphere of Fantacity, the annual children's festival of creativity. The event offers a vast range of activities, featuring many entertainers, speakers and VIP guest stars.

The festival aims to stimulate the imagination and creative instinct of children of all age groups, who crowd the streets and public buildings throughout the three days, participating in individual and group art and design projects.

The event, now in its ninth edition, has proved very popular and successful, involving schools all over Italy. It offers a range of laboratories centred round art, literature, theatre and philosophy, as well as the new sciences of robotics, social networking, internet and technological  advances aimed towards entrepreneur development.

Prizes will be awarded to the best original works in both short story and picture form.inspired by one of the following personages: Angelo the Dreamer, Paolo the Communications Expert, Achille the Cat, Adriana the Mother, Jamal the Scientist, the Twins Caterina and Enrico and the Princess Lucrezia.