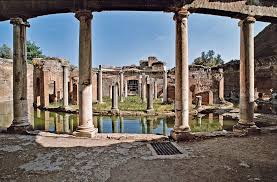 After a delicate two year-long restoration, one of the highlights of the Emperor Hadrian's Villa at Tivoli can be briefly visited on the 19th and 20th September 2015, European Heritage Day. The so-called Marittime Theatre, a circular building on an artificial island, is believed to be the favoured retreat of  the philosopher emperor,  The monument will once more be closed to allow restoration to continue, but it is hoped it can re-open for the coming Jubilee Year.

Another part of Hadrian's Villa that has been closed for archaeological research will also be open to visitors on European Heritage Day. This is the monumental area erroneously known as the Palestra (Gymnasium) which archaeologists now believe belonged to the Temple of the Egyptian goddess Isis as they have uncovered a series of sculptures related to Egyptian deities, including the god Horus in the form of a falcon.  The 4,000 sqm area contains buildings, hanging gardens, monumental rooms and precious marble facings, in addition to the statues recently discovered.