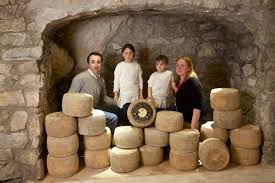 The historic Caseificio Il Fiorino (Il Fiorino Dairy) of Roccalbenga (Tuscany) continues to reap top awards in the classifications of the world's best cheeses. For the past few years, the family business on the slopes of Mount Amiata has notched prestigious prizes in international contests.

The latest accolade has arrived from Bergen (Norway), seat of the 2018 version of World Cheese Awards, where Il Fiorino competed against 3500 cheese producers from all over the world and scooped two Super Golds for its Riserva del Fondatore and the Grotta dei Fiorini. In addition, the Riserva del Fondatore was voted "Best Italian cheese" by a jury of experts from 29 countries, and the fifth best cheese in the world.

Il Fiorino Dairy was founded in 1957 by Diulio Fiorino. His daughter Angela Fiorini and her husband Simone Sargentoni have carried on the tradition, producing their pecorino cheeses exclusively from local ewe's milk obtained from the flocks of fifty shepherds. The cheeses are matured for two years in the cool depths of the cellars, tunneled out of the natural caves that are a characteristic of the Maremma, a rocky moorland area that has remained largely untouched.