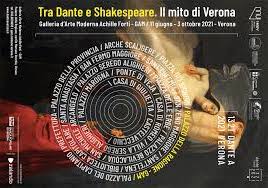 Last chance to catch up on the exhibition “Tra Dante e Shakespeare: il Mito di Verona” (From Dante to Shakespeare: the Myth of Verona) which sets out to highlight the particular attraction that the city of Verona had on Europe's two major poets.

Dante spent the first period of his exile from the Florentine state in Verona and expressed his gratitude for the hospitality he received in his “Paradise, XVII, 70”. We don't know whether Shakespeare, on the other hand, ever visited Verona (or Italy) during the years of obscurity when no documentation regarding his life has come to light. However, he set two of his plays in the “Fair City”: “Two Gentlemen of Verona” and the world's most famous love story - “Romeo and Juliet”, inspired by a 16th century writer Luigi da Porto.

The exhibition contains a selection of over 100 paintings, sculptures, illuminated manuscripts and documents as well as original books from the Verona public library and various museums, spanning a period from the 14th to the 19th century. Among the important works on show there are three rare drawings by Botticelli on loan from the Kupferstichkabinett (Berlin), depicting “Dante and Beatrice. Paradise II”.

The exhibition is closes on the 3rd October 2021.