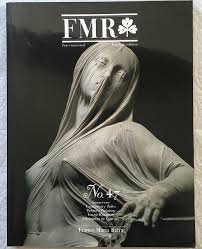 For over 27 years, the FMR periodical publication, hailed by subscribers such as Jacqueline Kennedy as “the most beautiful magazine in the world” was eagerly sought after by collectors for the high quality of its art reproductions and in depth articles by celebrated literary and art critics. In its heyday, the magazine was published in five editions in as many different languages.

Founded in 1982 by Parma-born publisher, Franco Maria Ricci, the magazine ceased publication after Ricci sold it to dedicate the last years of his life to the creation of “the world's biggest bamboo maze” on his estate at Fontanellato near Parma, which houses his art collection and a museum in its heart.

The much lamented FMR magazine is now about to be relaunched, under the guide of his widow, Laura Casalis, supported by an team of internationally famous writers, art directors and experts in various cultural fields. Publishing date chosen for the launch of the new edition is the winter solstice, December 2021, and the first number will be issued free of charge to all subscribers for the year 2022. Added perks on offer are: membership of the Franco Maria Ricci Club, free entrance to the Masone Labyrinth at Fontanellato and discounts for subsequent editions and other surprises. The new magazine will be printed once more by the same historic Milanese printers Milani Grafiche, to guarantee the continuing high quality.