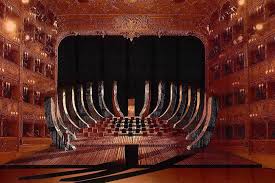 The total number of spectators allowed in the theatre at the moment is limited to 300 so Venice's historic La Fenice Opera House has come up with a revolutionary solution to social distancing rules imposed by the present pandemic. In order to avoid crowding in the stalls, the orchestra pit and stalls area have been fitted with a 3 m-high wooden structure resembling the ribs of a flat-bottomed boat. This is where the orchestra will sit, properly distanced. This is linked to the stage, where 70 spectators can be accommodated, as if in the prow.The remaining 230 will be spread around the boxes. The theatre's superintendent Fortunato Ortombina says that the structure is designed to evoke the image of an Arc transporting spectators into a new world. Experts claim that the main advantage of this novel arrangement is the acoustics, since the sound will be coming from the central body of the theatre and, vibrating on the wooden rib cage, will create an effect of “being inside a violoncello.” Normally, La Fenice accommodates a thousand spectators so the present arrangements inevitably create a considerable loss of revenue, but administrators believe that the most important thing is to get going once more.

La Fenice, one of the world's foremost operatic theatre, has hosted the premiers of works by Rossini, Bellini, Donizetti and Verdi, as well as debut productions by Stravinsky, Prokofiev, Britten, Kagel, Guarnieri, Perocco and others. It has been destroyed by fire twice – once in 1836 and again in 1996, and, true to its name (“The Phoenix”) each time it has been rebuilt and its sumptuous rococo interior perfectly reconstructed.

The new season opens on the 5th July 2020, with a series of orchestral concerts and recitals. Meanwhile, music lovers can enjoy live broadcast events online.

For details and Info: www.teatrolafenice.it