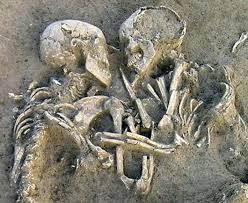 Verona is not the only Italian city that can boast a couple of tragic lovers. The city of Mantua (Veneto) has its own pair – an unnamed young man and woman lie locked in an eternal embrace in the National Archaeological Museum in Piazza Castello, within the perimeter of the celebrated Ducal Palace.

The lovers, housed in a glass coffin in the museum, date back to the prehistoric era. The young couple, who were no older than twenty, died sometime between 5,000 and 6,000 years ago. They lie face to face, with their arms around each other, in an eternal embrace.

Archaeologists found the grave in 2007 while excavating a Roman villa near San Giorgio di Mantova, but the “Amanti di Valdarno” (the Lovers of the Arno Valley), as they are called, only found a final resting place among the museum exhibits in 2017.

Flint arrow heads and knives were also found near the bodies, but archaeologists found no evidence of violent death and their story remains a mystery that will probably never be solved.