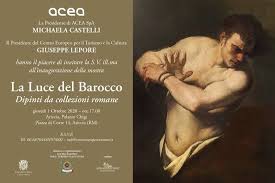 Despite the limitations imposed by the pandemic, Palazzo Chigi of Ariccia is staging two landmark exhibitions: “The Light of the Baroque” and “Angels and Demons” by Armenian artist Arshak Sarkissian.

Although so different in style and theme, the two exhibitions are actually closely connected. The Sarkissian event is part of a bilateral cultural exchange between Italy and the east European Armenian republic, initiated last year when Palazzo Chigi curator Francesco Petrucci exhibited part of the Ariccia collection in the National Gallery of Armenia at the capital city of Yerevan, where it was enthusiastically received. This is the first exhibition of Sarkassian's work to be staged in Italy.

“The Light of the Baroque” is a major exhibition featuring works from the palace's own collection (considered to be Italy's most important collection of Roman Baroque art) as well as masterpieces from private collections, some of which have never been available to the public before. “Stars” of the show are two works by Gian Lorenzo Bernini: the “San Sebastiano” painted in 1648-49 for the Barberini family and the “Angel” from the collection owned by the artist's descendants. Other leading artists of the Roman Baroque whose works can be admired in the exhibition, include Dughet, Carlo Maratta, Voet, Luti, Borgianni and others.

Palazzo Chigi of Ariccia, the former summer residence of Pope Alexander VII and his family, is one of the major tourist attractions in the Castelli Romani hills near Rome, renowned also as the setting for some scenes in Visconti's epic film “Il Gattopardo”.